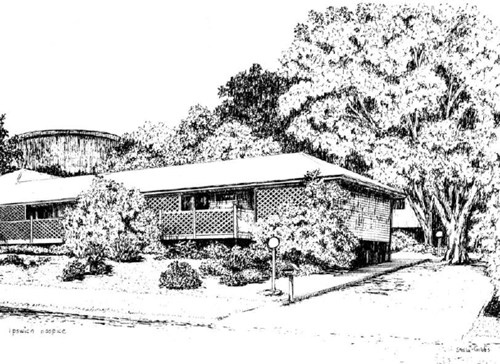 (House on the Hill drawing of Ipswich Hospice by Stella Gibbs).

The idea of a Hospice in the Ipswich region was developed by Central Mission in 1985, with the vision and drive of Reverend Eric Moore and Dr Hilda des Arts, alongside many members of the community.

An initial public meeting with representatives from local health, welfare and business groups, led to a feasibility study of local needs and resources, a development campaign in the Ipswich community and the incorporation of Ipswich Hospice Care in 1988.

With the provision of premises in the following years, volunteers from the community were trained, and provided respite and support within people’s homes.

As services increased and the need became more apparent for an additional facility between hospital and home, a capital campaign resulted in the raising of funds to build a purpose built complex on Chermside Road, Eastern Heights.

In 1995, Ipswich Hospice Care was officially opened by the Honourable Bill Hayden AC, Governor General of Australia, as a six bed Palliative Care facility for the Ipswich area. The following years saw Hospice receive some State and Federal recurrent funding, as well as gain accreditation with the Australian Council of Health Standards, recognition by the Department of Veteran Affairs, and receive a Private Hospital facility license.

Today, Ipswich Hospice Care is a known and recognised community organisation, which, having surpassed the care of our 1000th guest, continues to provide the highest standard of Palliative Care and Bereavement Support to the people of Ipswich and West Moreton region.

Who is Hilda des Arts

Doctor Hilda des Arts did more to develop a great sense of camaraderie in our community than anyone else, a driving force, an activist and a volunteer.

Born in 1915, she spent the first five years of her life in London, before returning to Germany and eventually studying Sociology at various German universities. After the war her parents started a newspaper, and being the kind of person she was she put into place social benefits for the employees, including a kindergarten.

After the death of one of her daughters from cancer, she moved to Ireland and found a kind of social support she had never experienced before- and this was the kind of social caring for her community that Hilda wanted to recreate.

After moving to Ipswich Hilda worked at Lifeline, training volunteers and counselling those in need, as well as beginning to campaign for something that would eventually become Ipswich Hospice.

A dream she shared with Rev. Eric Moore they started with a house in Roderick street providing Palliative Care for the community and everything evolved from there. Hilda took on providing bereavement support for families and in 1995, Ipswich Hospice Care was officially opened as a six bed Palliative Care facility for the Ipswich area. This was followed in 2003 with the opening of Hilda’s House providing bereavement services to both adults and children.

Without the passion and drive from Hilda des Arts Ipswich Hospice Care would not exist today as a recognised community organisation.